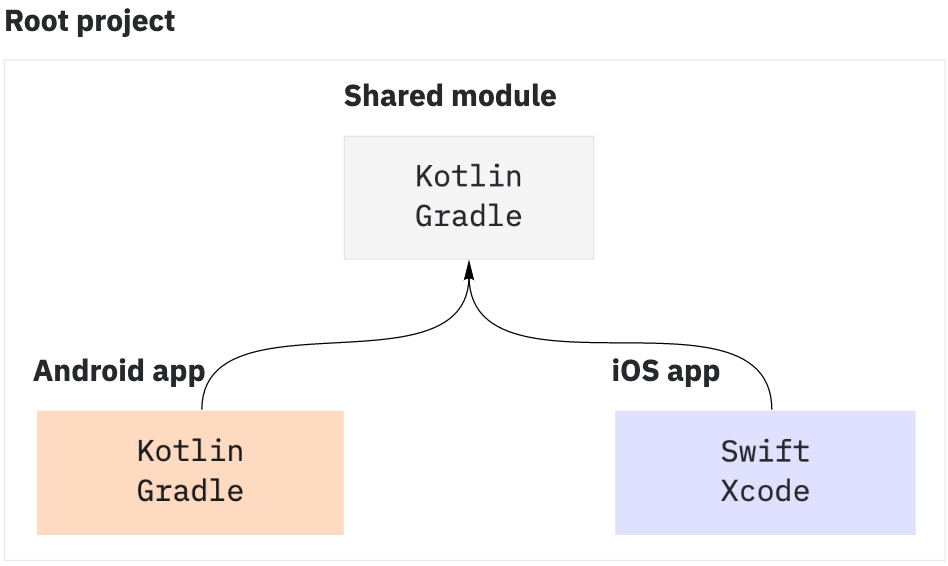 If you use Kotlin Multiplatform Mobile (KMM) for sharing code between iOS and Android, you will at some point have to decide how you will deliver the shared module to your platform projects. While Android integration is smooth out of the box, iOS integration can require some additional setup. In this post, you will learn how to use the latest Kotlin features to easily connect the KMM module to your iOS projects and simplify your project build configuration when the shared and iOS source code from your project are in the same location.

Ways to connect the KMM module to the iOS project

There are a couple of ways to integrate shared KMM modules into iOS applications. If the source code of the KMM module and Xcode project are in the same location, one of the approaches is to use the CocoaPods integration. If you don’t want to use CocoaPods, another approach is to expose the iOS framework to the Xcode project that the iOS application is built from by using a special Gradle task.

This task uses the configuration of the iOS application project to define the build mode (debug or release, device or simulator target) and provides the appropriate framework version to the specified location. The Xcode project is configured so that the task executes upon each build to provide the latest version of the framework for the iOS application.

Before Kotlin 1.5.20, you had to provide this Gradle task and configure the XCode project manually, or you could use KMM Plugin for Android Studio project wizards, which generated the required

Gradle task and configured the XCode project to use this task for the build.

Starting from Kotlin 1.5.20, the Kotlin Multiplatform Gradle Plugin provides an

task that can be used from Xcode to connect the KMM module to the iOS part of your project. This task can be used only for integration purposes and is only for Xcode, not for CLI.  If you want to create a new KMM project, consider using the KMM plugin for Android Studio project wizard. It allows you to create a KMM project with a suitable iOS integration option – either the Cocoapods dependency manager or a regular framework that will use the new

in the generated project configuration.

If you have an existing project that uses the

How to migrate to the new approach

This is an integrational task, and it is visible only from Xcode. If you want to assemble the iOS framework manually, you should use the

For additional reference, check out the commit with the migration diff from the sample project.

If you run into any problems

Your feedback and ideas have a big influence on the decisions we make about new KMM features. Please share your experience with using Kotlin Multiplatform in the user survey. Don’t miss this chance to shape the future of technology!

How Do You Use Stack Overflow? The Kotlin Community Survey