In this article, you will learn how you can organize multiple Kotlin scripts as Gradle tasks and make them easily executable this way. I’ve found a discussion about this here. Somebody wanted to execute Kotlin scripts with Gradle build scripts which is, of course, possible by using

as shown in this (Groovy) build script. This doesn’t look very pretty though, and, as described in the corresponding thread, isn’t very performant and manageable. Another solution would be to use Gradle scripts written with the Kotlin DSL and define custom tasks within a

file, which obviously can hold and run Kotlin code naturally:

The problem with this approach is that, in my case, I had multiple large Kotlin scripts I wanted to make executable this way. If I had put all of them into

s, the script would have been too bloated and hard to maintain. Note that in my case, these tasks would not contribute to the build logic directly but rather provide business-relevant tasks, which I wanted to make executable via Gradle.

As described in the Gradle documentation, build logic and especially custom tasks shouldn’t live within the build script directly. Gradle, therefore, offers the possibility to use a so-called

directory. This directory is treated as an included build, i.e. Gradle automatically compiles and tests this code and makes it available on the build script classpath. The following shows a typical project structure using this special

As you can see here, the

, in which we define dependencies and plugins for

itself. As mentioned, the compiled code will be available for the surrounding build so that you can for instance define custom tasks in the

and use them in the main

Let’s say we have two bigger tasks we want to make available as Gradle tasks, which we call task1 and task2. Both tasks are good fits to be implemented with Kotlin.

This is very basic and there’s nothing special in it. Now, the goal is to define two custom tasks taks1 and task2 within this script. Both tasks are supposed to be executable via

. To make this possible, we create the

directory structure as shown above on the same level the build script already exists. Within the

, we now create the custom tasks as Kotlin classes:

Just like we would define a task within a Gradle build script directly, we define

and the task itself in a method annotated with

. Learn more about custom tasks here. To make this a bit more interesting, we want to load a MySQL driver in this task, which requires us to make the corresponding dependency available for the

build. Let’s take a look at its build script (existing directly in

As mentioned, we add the dependencies we want to use within the

. Another thing to note is that the

plugin is applied to this build in order to set up the Kotlin compiler features and dependencies to match the ones shipped with Gradle. We used the nicer alias

Now, after defining both Task1 and Task2 as subclasses of

, they can be used in the main build.gradle.kts script like this:

Note that both probably need to be imported as shown here. In the console,

will list them, and you can execute them by running

respectively. You can also see the tasks listed in IntelliJ IDEA: 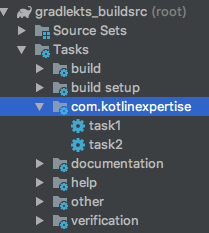 The source code can be found here: https://github.com/s1monw1/gradle_buildSrc_kotlin

You may want to read another article of mine about the Gradle Kotlin DSL to get more information about the topic. Enjoy.

The Making of Accessible Android Applications