Kotlin 1.4.30 is now available. This is the last 1.4 incremental release, so we have lots of new experimental features that we plan to make stable in 1.5.0. We would really appreciate it if you would try them and share your feedback with us. We hope you enjoy testing out all these new updates, and please let us know what you think.

What’s changed in this release:

We’ve decided to cover two of the significant updates in separate blog posts so that we can provide more details on these features.

The new JVM backend reached Beta, and it now produces stable binaries. This means you can safely use it in your projects.

More details about the update, ways to enable the new JVM IR backend, and how you can help stabilize it can be found here.

Among the new language features we plan to release in Kotlin 1.5.0 are inline value classes, JVM records, and sealed interfaces. You can read more details about them in this post, and here’s a brief overview:

Java records. Another upcoming improvement in the JVM ecosystem is Java records. They are analogous to Kotlin

classes, mainly used as simple holders of data. Interoperability with Java always has been and always will be a priority for Kotlin. Kotlin code “understands” the new Java records and sees them as classes with Kotlin properties.

So now we kindly ask you to give these language features a try and share your feedback with us. We would like to know what expectations you have for them, the use cases where you want to apply these features, and any thoughts or ideas you have about them.

You can find a detailed description of the new language features and instructions on how to try them out in this blog post.

As of Kotlin 1.4.30, the Kotlin Gradle plugin is fully compatible with the Gradle configuration cache. This speeds up the build process. For example, the Square, which uses Kotlin for Android, has a build (Android, Java, Kotlin) of 1800 modules. Its team reports the following numbers:

When you run the command, Gradle executes the configuration phase and calculates the task graph. Gradle caches the result and reuses it for subsequent builds, saving you time.

To start using this feature, use the Gradle command or set up your IntelliJ-based IDE. And if anything doesn’t work as expected, please report it via YouTrack.

Please note that this feature is still in Alpha for multiplatform. 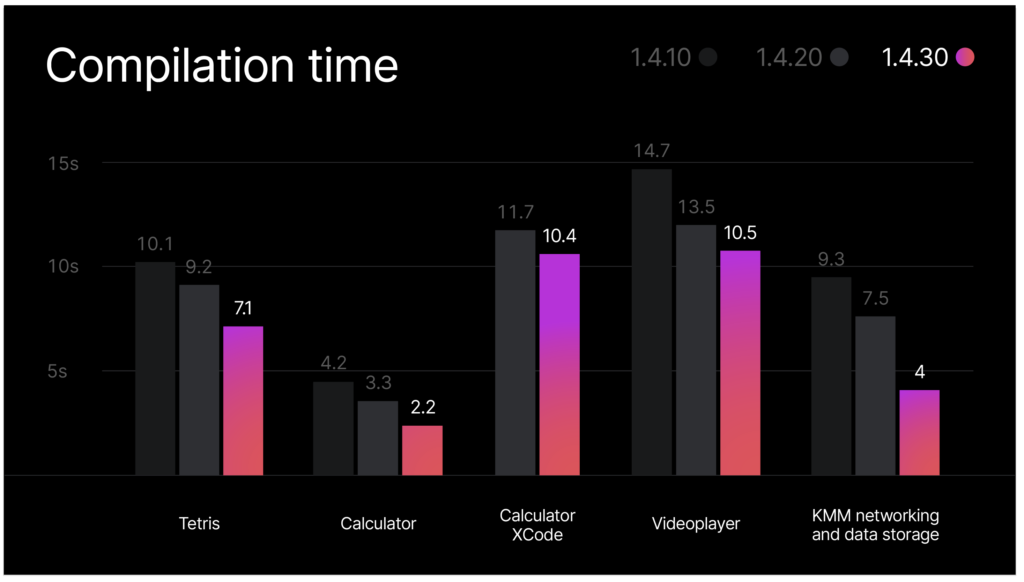 We plan to continue optimizing the compiler, you can follow the issue in YouTrack.

With the 1.3.60 Kotlin release in October 2018, we introduced support for building Kotlin apps for Apple Watch simulators. Last November the Apple Watch simulator architecture was changed from i386 to x86_64, creating issues for developers working on this feature. The new Kotlin/Native

target can be used to run the watchOS simulator on 64-bit architecture and it works on WatchOS starting from version 7.0.

Kotlin/Native now supports Xcode 12.2. The macOS frameworks that have been added to the Xcode 12.2 release can be used with this Kotlin update. For example, the MLCompute framework is now available for users developing applications for macOS.

We’ve made lazy initialization of top-level properties available as Experimental. You can read more about this in What’s new.

This release introduces an experimental locale-agnostic API for changing the case of strings and characters. The current

API functions are locale-sensitive, which is not obvious and inconvenient in some cases. In the case of different platform locale settings it affects the code behavior – for example, in the Turkish locale, when the string “kotlin” is converted by

it results in “KOTLİN”, not “KOTLIN”. Now it uses the root locale, so it will work as expected.

You can find the full list of changes of text processing functions in KEEP. Remember that this API is experimental, and please share your feedback with us in YouTrack.

The current conversion functions from Char to numbers, that return its UTF-16 code expressed in different numeric types, are often confused with the similar String-to-Int conversion returning the numeric value of a string.

To avoid this confusion we’ve decided to separate Char conversions into two following sets of clearly named functions: functions to get the integer code of

, and functions to convert

to the numeric value of the digit it represents.

This feature is also Experimental, but we plan to make it stable for the 1.5.0 release. See more details in KEEP.

Find more about all the updates for 1.4.30 in What’s new and New JVM Backend and Language Features blog posts.

IntelliJ IDEA will suggest updating the Kotlin plugin to 1.4.30 automatically, or you can update it manually by following these instructions. The Kotlin plugin for Android Studio Arctic Fox will be released later.

If you want to work on existing projects created with previous versions of Kotlin, use the 1.4.30 Kotlin version in your project configuration. For more information, see the docs for Gradle and Maven.

You can download the command-line compiler from the Github release page.

The release details and the list of compatible libraries are available here.

If you run into any problems with the new release, you can find help on Slack (get an invite here) and report issues in our YouTrack.

Before updating your projects to the latest version of Kotlin, you can try the new language and standard library features online at play.kotl.in.

We want to thank all of our external contributors whose pull requests were included in this release:

Error: unable to get links from server. Please make sure that your site supports either file_get_contents() or the cURL library.