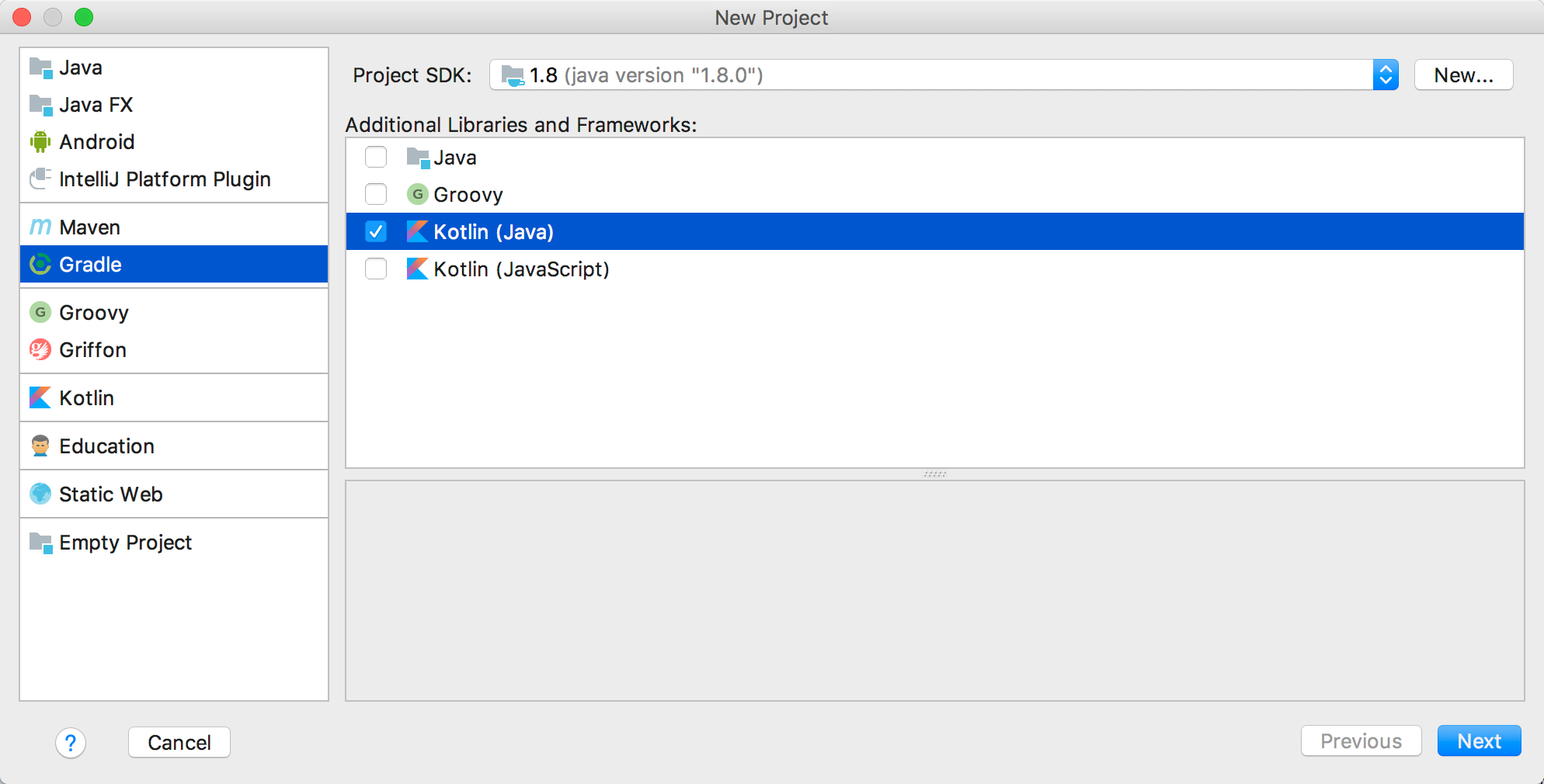 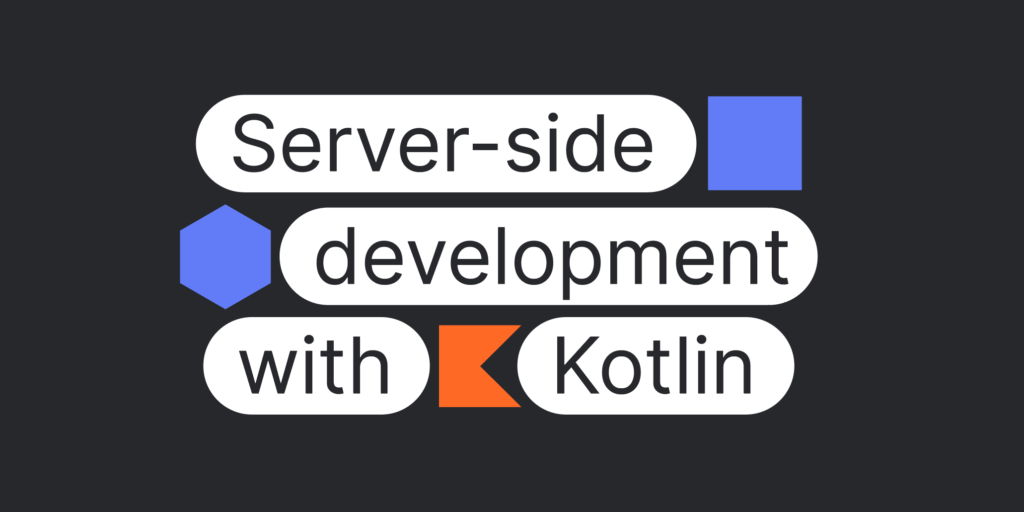 The most popular and feature-rich framework in the ecosystem is Spring. Approximately half of all projects in the JVM ecosystem now use Spring as the framework of choice. The previous blog post about Kotlin for server-side development includes stories from Atlassian and Expedia who use Spring Boot for their projects.

Kotlin is one of the four major themes for Spring Framework 5.x. A number of extensions were added to the Spring core API specifically to provide better support for Kotlin.

In fact, Spring’s official documentation features code samples in both Java and Kotlin. This is very convenient if you’re new to Kotlin, because you can see the code sample in Java and then immediately see its Kotlin equivalent and so understand the idioms faster. 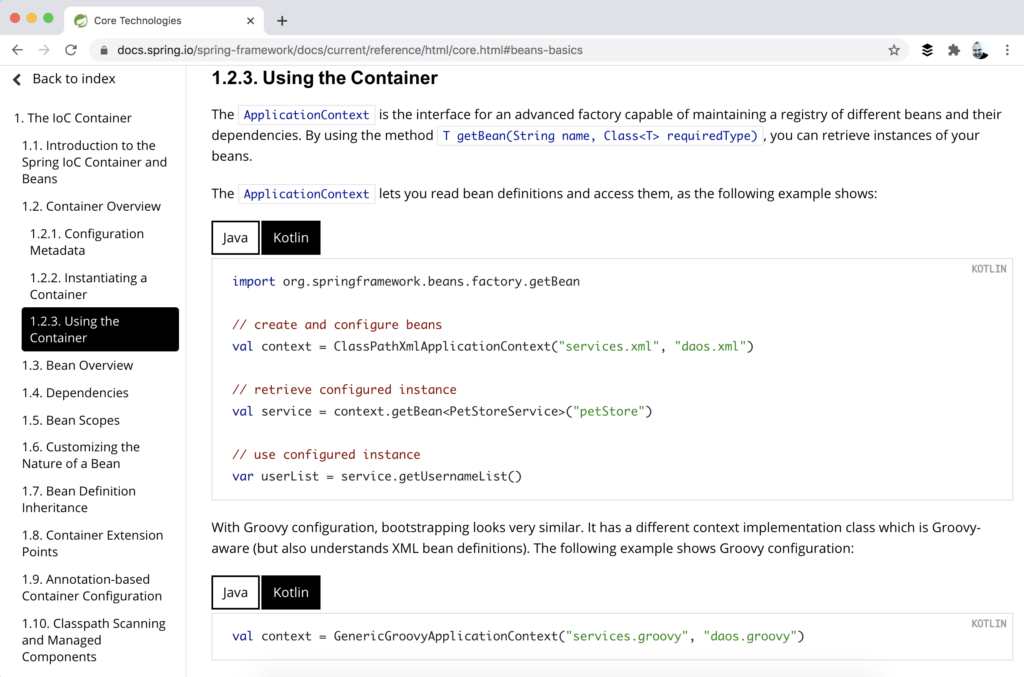 The start.spring.io project generator also supports Kotlin along with Java and Groovy.

The number of Spring tutorials is growing. We recommend that you start with the Building web applications with Spring Boot and Kotlin tutorial.

As support for Kotlin in Spring Framework is being improved, we had the privilege to host Sebastien Deleuze with his presentation about The State of Kotlin Support in Spring at the Kotlin 1.4 Online Event this year. See the video below.

An interesting new addition to Spring is the project Spring Fu. It is designed to configure Spring Boot with code in a declarative way. The Kotlin variety of the configuration DSL looks quite nice:

This new approach to configuration in Spring promises faster startup times and lower memory consumption, and it is a good fit with GraalVM native image thanks to its reflection-less approach.

Ktor is a framework created and maintained by JetBrains. It was built with Kotlin from the ground up. Ktor encourages a minimalistic approach to application design, as you only need to configure the functionality that your project requires. Using Kotlin coroutines, Ktor is truly asynchronous and highly scalable. Ktor also includes an HTTP client that is implemented as a multiplatform library and is widely used in mobile application development with Kotlin.

Our previous blog post covers JetBrains Space and Adobe Experience Platform projects that use Ktor because of its support for asynchronous programming.

At Kotlin 1.4 Online Event, Hadi Hariri gave a presentation about the current state of the Ktor project and its future plans. See the video below.

Here are a few tutorials we recommend for learning about Ktor:

Of course, Spring and Ktor are not the only frameworks in the JVM ecosystem and there are plenty of other frameworks that you can use with Kotlin. Take a look at Micronaut, Quarkus, Javalin, SparkJava, Vaadin, CUBA, and Vert.x. This is just a small list of the frameworks available. All these frameworks have either code samples in Java and Kotlin side by side or have dedicated tutorials on how to use the framework with Kotlin.

There are also a number of frameworks that are implemented in Kotlin. For instance, http4k, and Hexagon.

Backend applications often rely on database access. One of the most popular libraries today for working with databases is the Exposed library. It is an ORM framework for Kotlin that offers two levels of database access: a typesafe SQL-wrapping DSL, and lightweight data access objects.

As you might have guessed, Exposed is not the only library that you can use with Kotlin for database access. You can use jdbi, jooq, JPA with Spring Data, and even just pure JDBC API to access databases from Kotlin code.

Testing a vital part of application development. JUnit and TestNG are perfectly fine for implementing unit tests in Kotlin. But there are more additional libraries that are great for testing in Kotlin:

Aside from handling HTTP requests and accessing databases, applications are often required to communicate with other services using specific protocols, perform decoding/encoding of data in various formats, and many other things. Here are a few libraries that will be useful for application development with Kotlin.

JSON is the universally accepted standard format for sending data between web servers and browsers. There are awesome JSON libraries available in the Java ecosystem and they are great for use in Kotlin programs too. Jackson and gson are the most popular Java libraries for working with JSON. However, there are also libraries that are implemented with Kotlin from scratch. Klaxon is a good example. Also kotlinx.serialization was recently released and it provides JSON support.

RSocket is also gaining popularity as a protocol for use in building microservices. Kotlin integration was recently added to RSocket.

These are just a few examples. In fact, there is a long list of Kotlin libraries maintained by the community where you’re sure to find a library for the task at hand. However, we’d like to point out that, thanks to Java interoperability, it is also possible to use virtually any Java library with Kotlin.

Code quality is an important topic for Kotlin too! Thanks to the type system, especially null-safety, Kotlin is quite a safe programming language. However, there is still a need for code style checks. That’s the part that is currently implemented via additional tools.

Ktlint is a static code analysis tool maintained by Pinterest. It is a 2-in-1 tool that provides linting and formatting (supported via EditorConfig) for Kotlin code.

Detekt is a static code analysis tool that operates with the abstract syntax tree provided by the Kotlin compiler. It is easy to set up with Gradle and there’s also an IntelliJ IDEA plugin that simplifies configuration.

Kotlin was initially designed as an alternative JVM programming language, meaning that Kotlin can be used anywhere where Java is used. Thanks to Java interoperability, it is easy to use any of the existing frameworks and libraries that are familiar to Java developers. This all greatly simplifies the adoption of Kotlin for application development on the JVM.

The current state of Kotlin support in the ecosystem is at the stage where even big projects and companies are confidently adopting it. You can read about a few notable examples of such projects in the previous blog post, Productive Server-Side Development With Kotlin: Stories From The Industry

Hey #Kotliners💡, ever wondered how #Coroutines work under the hood?🤔 Cool! This November, Mohit Sarveiya (Android GDE) will dissect 🗡️ coroutines and take us through some of the lesser known and advanced features of #Kotlin coroutines! RSVP