1.2 is out! The latest version of our multiplatform serialization library brings a number of improvements – here are the highlights:

Version 1.2 also includes new support for alternative names for JSON fields, and it provides a new experimental approach that automatically generates Protobuf schemas from Kotlin classes, a feature for which we’re eager to receive your feedback!

Let’s explore the changes and additions in this new version together! If you’re already convinced, you can of course also jump directly to the upgrade instructions below!

, and we’re constantly working to improve their performance. 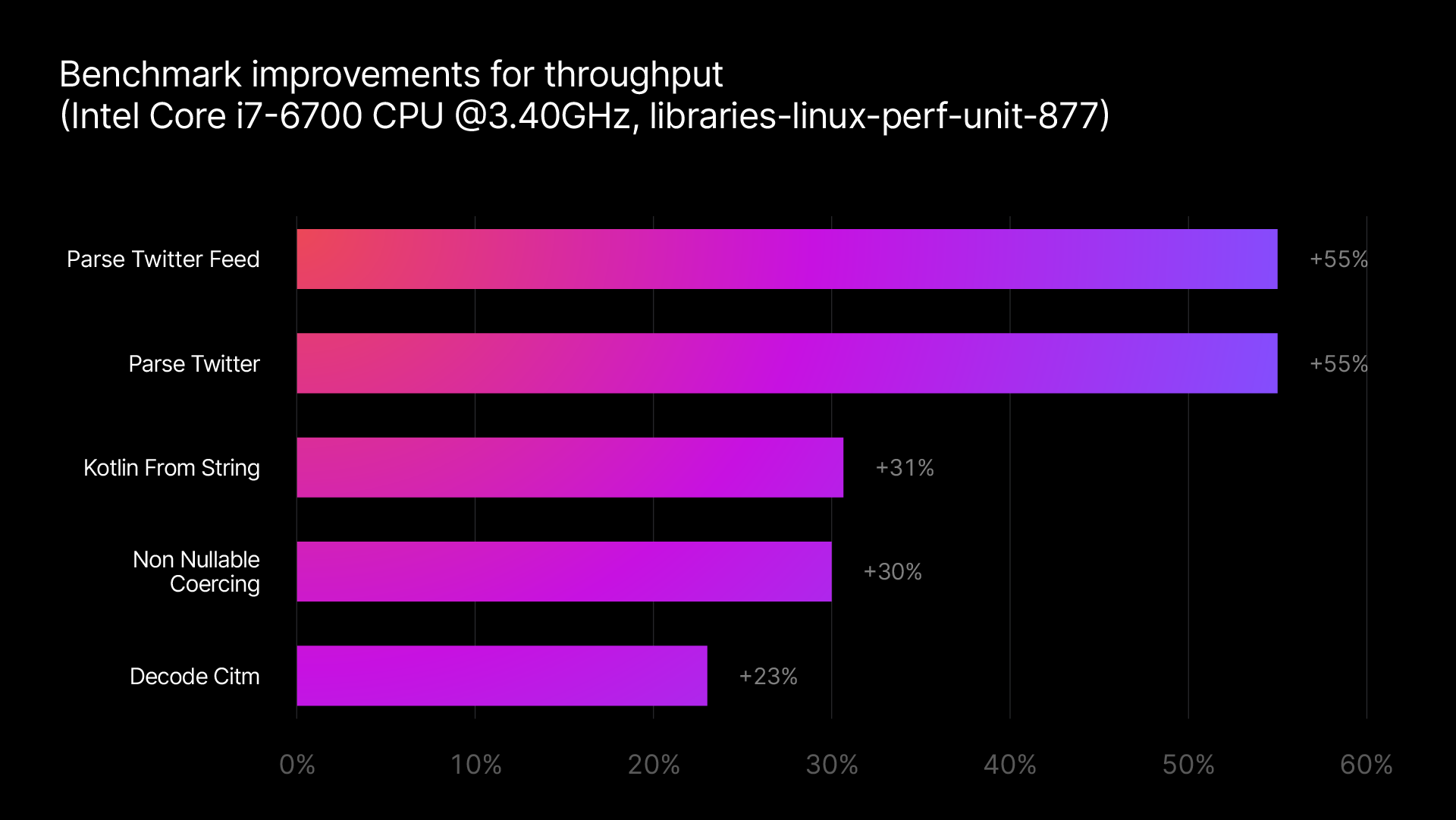 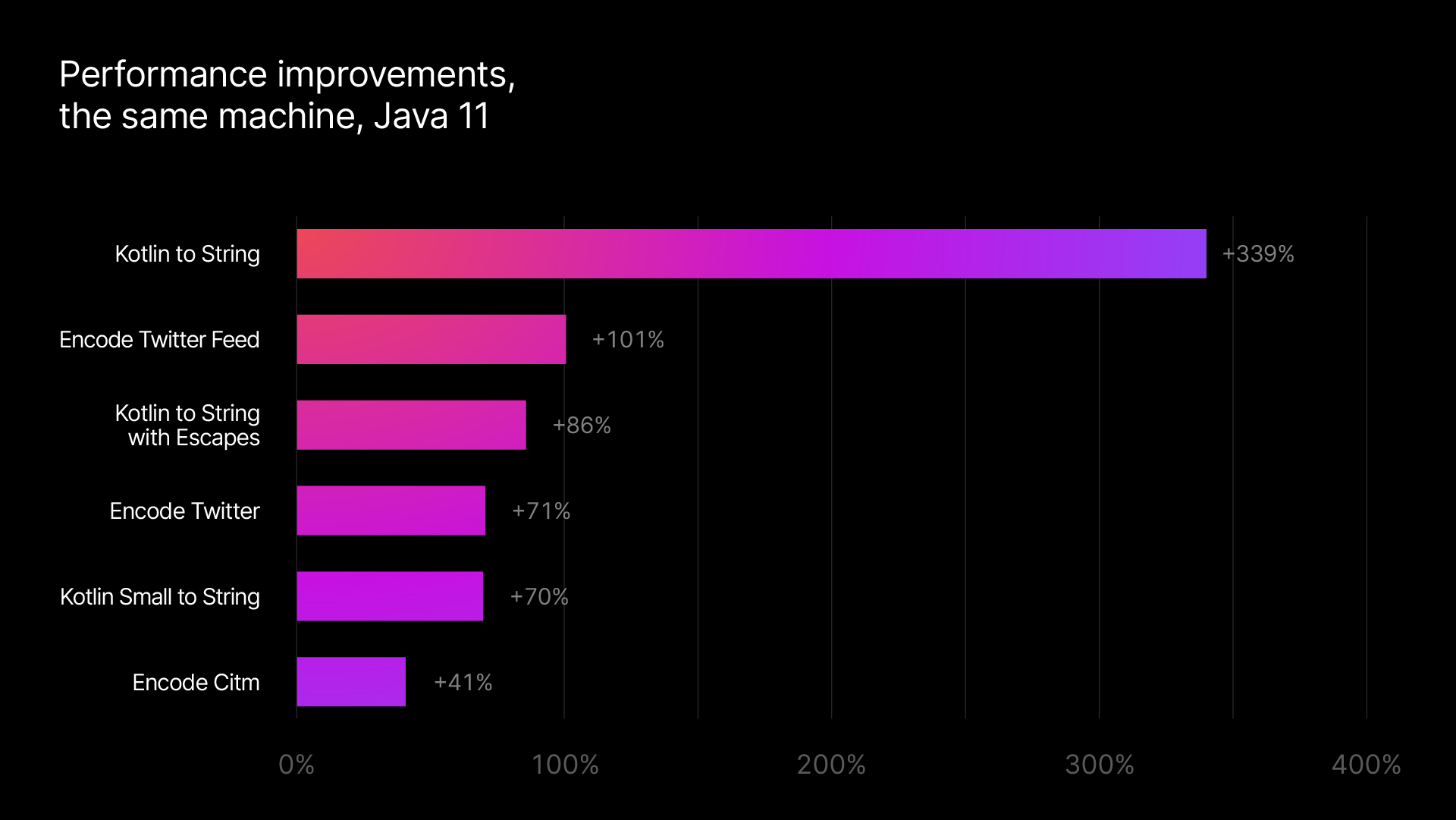 Just by upgrading to the latest version of our library, you can expect up to double the speed for typical encoding and decoding tasks. (As you can see, some of our internal benchmarks, which were particularly affected by these new optimizations, even exceed that number!)

achieves (and in some ways exceeds) performance parity with other JSON libraries right out of the box. Even the simplest snippets benefit from this overhaul:

The best way to get a feeling for these improvements is to benchmark your own application with the newest version of our library. For some rough performance numbers, you can have a look at our internal benchmarks for encoding and decoding, which compare the latest version of

to its previous release.

Value classes (formerly called inline classes) are a way to wrap another Kotlin type (for example, a number) in a type-safe manner without introducing additional runtime overhead. This helps make your programs more expressive and safe without incurring performance penalties.

’s built-in JSON serialization now works for value classes. Just like other Kotlin classes, we just have to annotate a

Value classes are stored (and serialized) directly as their underlying type. We can see this by adding a field with a

type to a serializable

, and inspecting its output:

In the example above,

as the underlying primitive (an

). This means you get to enjoy maximum type-safety inside your Kotlin code, while still benefiting from a concise serialized representation of these types, without unnecessary boxing or nesting.

We’re still refining the design for hand-written, custom serializers for value classes, and they remain experimental for now. You can find out more on this topic in docs on GitHub.

Unsigned integers are an addition to the Kotlin standard library that provide types and operations for non-negative numbers. With the release of Kotlin 1.5.0, the following unsigned number types are available:

The JSON encoder and decoder in

now supports these types out of the box. Just like other number types, unsigned integer values will be serialized in their plain number representation (the same representation you see when invoking

), without truncation, wrapping, or conversion to signed types.

Please note that support for value classes and unsigned integers is currently available for JSON. In a future release, we will also provide direct integrations for CBOR and Protobuf – stay tuned!

, have a look at the documentation on GitHub.

Sometimes, you need to parse JSON fields that have different names but the same meaning, for example, to maintain backwards compatibility. With the new

annotation, you can now give JSON fields alternative names, which will be used during the decoding process.

To illustrate this, let’s look at an example. Let’s assume that depending on its version, a server gives us one of the two following responses:

have the same meaning, and we want to map them to the same field in our Kotlin class. With the new

annotation, we can specify

as an alternative key for the

Notice how this is different from the

annotation, which allows you to rename fields for both encoding and decoding, but does not allow you to specify alternatives.

We hope that this feature will make it easier for you to work with services that return differently named fields representing the same values, survive schema migrations, and provide graceful upgrades for your applications!

To make your experience learning

as comfortable and fun as possible, we try to provide you with a number of reference materials. One of them is the Kotlin Serialization Guide on GitHub, which offers a walkthrough for the functionality provided by the library and includes self-contained examples to give you an intuitive understanding of each feature.

Protocol Buffers (Protobuf) is a binary serialization format for structured data created by Google. As a binary format, it is more space-efficient than JSON or XML, while still providing a language-agnostic structure which you can use for application-to-application communication.

, you can use multiplatform Protobuf serialization (using proto2 semantics) with experimental stability. Like the other formats, you annotate your class as

and use the builtin

With your Kotlin classes as the source of truth (together with any customizations you might want to apply),

is able to infer the binary schema of the data, making Protobuf communication between multiple Kotlin applications concise and convenient.

1.2 now also includes an experimental schema generator for Protocol Buffers. It allows you to generate

files from your Kotlin data classes, which in turn can be used to generate representations of your communication schema in other languages, including Python, C++, and TypeScript.

For instructions on how to get started with the new schema generator, check out the corresponding instructions in the documentation.

file has been generated, you can store it in your repository and use it to generate representations of your Kotlin classes in other languages. We hope that this will make it easier for you to use

’s Protobuf integration in multi-language applications without having to give up the convenience of managing your schemas directly in Kotlin source code.

Because this is the first iteration of the Protobuf schema generator, we heavily rely on your feedback. Please give it a try, and tell us about your use cases, how you manage your models and

files, any problems you encounter, and the features you’d like to see, using the GitHub issue tracker.

When working with the schema generator, please keep some of its limitations in mind. As a rule of thumb, if a Kotlin class can be serialized with the protobuf implementation included with

, then the schema generator will provide support for it. This also means that the same restrictions apply. Here are some points to be on the lookout for:

That concludes our overview! If you’re ready to enjoy faster JSON encoding and decoding, support for Kotlin 1.5 type system additions, Protobuf schema generation, and more, then it’s time to upgrade!

, upgrading to version 1.2 is very quick (and if you haven’t tried

before, now is a great time to get started!). First, update the

block with the runtime library, including the formats you want to use in your application:

If you run into any trouble